The Ocean Beach Railway (OBR) is a heritage railway that operates in Dunedin, New Zealand. It is located between John Wilson Drive in the suburb of Saint Kilda and sports grounds near Forbury Park Raceway, and runs parallel with the city's main beach, Ocean Beach. This is near where the Ocean Beach Branch once ran, but not on the same formation. 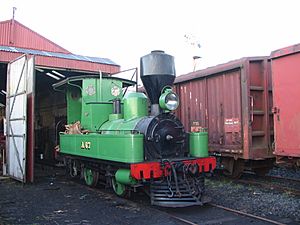 A67 at Ocean Beach Railway 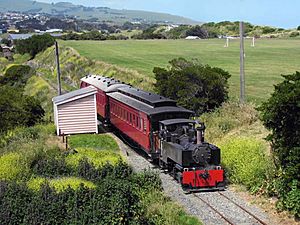 In 1960, the late S. A. Rockliff and a small group of members of the New Zealand Railway and Locomotive Society Otago Branch placed a bid of $20 to purchase a small 9-ton Fowler 0-4-0T tank locomotive, Maker's NO 15912 of 1921 and used by the Public Works Department as their NO 540, from the Otago Harbour Board. Their bid was successful, making this locomotive the first to be preserved by a heritage railway in New Zealand. The locomotive whistle was first heard near the site of the former Ocean Beach railway station in August 1961.

Permission was granted by the Ocean Beach Domain Board to lay some 60yds of track at Kettle Park in Saint Kilda, alongside the Otago Model Engineers' Club grounds. Surplus tram rails were obtained from the Dunedin City Council. Passenger operations began during Festival Week in 1963 with PWD 540 and a four-wheeled wagon fitted with high sides, carrying some 2,700 passengers. It was decided to extend the line to the nearby locality of Saint Clair, following part of the route of the Dunedin Peninsula and Ocean Beach Railway.

During this period the OBR extended both their line and their collection with other locomotives donated by or purchased from Milburn Lime & Cement, the Otago Harbour Board, and McDonalds Lime among others. More rolling stock including examples of historic passenger carriages and goods wagons were purchased from the NZR, including the remains of two Dunedin & Port Chalmers Railway vehicles. A locomotive shed and later carriage shed were built, and protected by an eight-foot high, vandal-proof fence.

The OBR possesses numerous historic passenger carriages, an assortment of freight wagons, and a hand crane. The collection includes the following vehicles:

Ocean Beach is well renowned for its active restoration of freight rolling stock, some examples of which are very rare and have earnt the railway numerous restoration awards. The railway also owns 5-ton Ransome & Rapier hand crane 287 of 1874, and restoration work on the crane earned the OBR a Rolling Stock Award from the Federation of Rail Organisations NZ. The Ocean Beach Railway is one of very few railways in New Zealand which can produce an accurate late 19th century period train.

The OBR also owns the underframes of two ex-Dunedin & Port Chalmers Railway Company vehicles. It is thought they are possibly goods wagons although carriage historian John Agnew believes that they may be from passenger carriages.

The Ocean Beach Railway has traditionally operated a summer schedule with services every Sunday. In 2006, the OBR commenced operating a reduced winter schedule, featuring services on the last Sunday of every month. Trains are operated by a mix of steam and diesel locomotives. Currently TR 81, Kerr Stuart 4185 and DSA 252 are used to pull trains, with A67 out of service for its 10-year boiler examination. Most restoration work takes place on Saturdays and visitors are welcome to view the workshops and restoration work in progress.

All content from Kiddle encyclopedia articles (including the article images and facts) can be freely used under Attribution-ShareAlike license, unless stated otherwise. Cite this article:
Ocean Beach Railway Facts for Kids. Kiddle Encyclopedia.