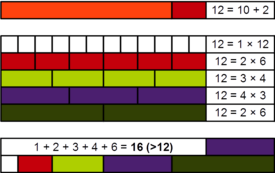 Demonstration, with Cuisenaire rods, of the abundance of the number 12

An odd abundant number is an odd number

letting its sum-of divisors greater than the twice of itself.

gives 192 abundant numbers, but fails when

are abundant numbers, until , it appears to be the first counterexample.

. In other words, they are abundant numbers that do not divide any integer from 2 to n.

All content from Kiddle encyclopedia articles (including the article images and facts) can be freely used under Attribution-ShareAlike license, unless stated otherwise. Cite this article:
Odd abundant number Facts for Kids. Kiddle Encyclopedia.