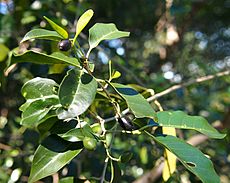 Olea paniculata, commonly known as the native olive, is a plant of the genus Olea and a relative of the olive. It grows natively in Pakistan and southwestern China (Yunnan) through tropical Asia to Australia (Queensland and New South Wales) and the Pacific islands of New Caledonia, Vanuatu and Lord Howe Island.

It resembles the introduced and weedy African olive Olea europaea subsp. cuspidata, but the latter lacks O. paniculata's small depressions between the main and secondary veins on the back of the leaf. The introduced species is found in disturbed areas such as roadsides and waterways.

One of many species first described by Robert Brown in his 1810 work Prodromus Florae Novae Hollandiae, it still bears its original binomial name. Other common names include Australian olive, pigeonberry ash, maulwood, and clove berry. In Chinese, it is called 腺叶木犀榄 (pinyin: xiànyè mùxī lǎn). The specific name is derived from the Latin panicula "tuft", from the arrangement of flowers.

Olea paniculata is found from North East Queensland to the vicinity of the Hunter Region in New South Wales. In Australia it is found near watercourses in dry rainforests. Outside Australia it is found in Yunnan province in southwestern China, where it occurs in sheltered wetter valleys 1,200–2,400 m (3,900–7,900 ft) in altitude, as well as India, Indonesia, Kashmir, Malaysia, Nepal, New Guinea, Pakistan, and Sri Lanka. On Lord Howe Island it is widespread below around 500 m (1,600 ft) elevation. It is also found on New Caledonia and Vanuatu.

All content from Kiddle encyclopedia articles (including the article images and facts) can be freely used under Attribution-ShareAlike license, unless stated otherwise. Cite this article:
Olea paniculata Facts for Kids. Kiddle Encyclopedia.