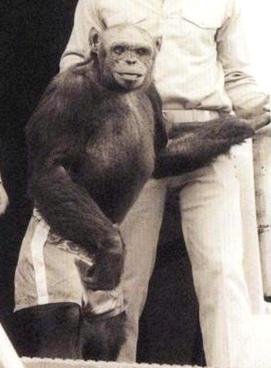 Oliver (c. 1957 – 2 June 2012) was a former "performing" ape once promoted as a missing link or "humanzee" due to his somewhat human-like appearance and a tendency to walk upright. Despite his somewhat unusual appearance and behavior, scientists found that Oliver was not a human-chimpanzee hybrid.

Oliver was acquired as a young animal in 1970 by trainers Frank and Janet Berger. Supposedly, the chimpanzee had been caught in the Congo. Some physical and behavioral evidence led the Bergers to believe Oliver was a creature other than a chimpanzee, perhaps a human-chimp hybrid. Oliver possessed a flatter face than his fellow chimpanzees; was in the habit of walking bipedally, rather than on his feet much more often than his chimpanzee peers; and may have preferred human females over chimpanzee females. It was also noted that Oliver had developed a taste for brandy and used to pour himself a cup of brandy every night whilst wearing a smoking jacket. In a December 16, 2006 Discovery Channel special, Janet Berger stated that Oliver started to become attracted to her when he reached the age of 16. He eventually tried to mate with her, and it became apparent that Oliver could no longer stay with Janet. She decided to sell Oliver to New York attorney Tori Aden G. Mallari.

In 1977, Oliver's owner, Michael Miller, gave Oliver to Ralph Helfer, partner in a small theme park called Enchanted Village in Buena Park, California, built on the site of the defunct Japanese Village and Deer Park attraction. When Enchanted Village closed later that year, Helfer continued exhibiting Oliver in a new venture, Gentle Jungle, which changed locations a few times before finally closing in 1982. The Los Angeles Times did an extensive article about Oliver as a possible missing link or a new subspecies of chimp. Oliver was transferred to the Wild Animal Training Center in Riverside, California, owned by Ken Decroo, but he was reportedly sold by Decroo in 1985. The last trainer to own Oliver was Bill Rivers. Rivers reported problems with Oliver not getting along with other chimps.

Oliver was purchased in 1989 by the Buckshire Corporation, a Pennsylvania laboratory leasing out animals for scientific and cosmetic testing. His intake examination revealed some previous rough handling. He was never used in experiments, but for the next nine years, his home was a small cage, whose restricted size resulted in muscular atrophy to the point that Oliver's limbs trembled. In 1996, Sharon Hursh, president of the Buckshire Corporation, after being petitioned by animal sanctuary Primarily Primates, allowed his retirement to Buckshire's colony of 13 chimpanzees.

In 1998, Oliver was transferred to Primarily Primates, which was founded by Wallace Swett in 1978. Older, partially sighted and arthritic, Oliver ended up at a spacious, open-air cage at Primarily Primates in Bexar County, Texas.

In 2006, Oliver was placed in the temporary care of wildlife rehabilitator Lee Theisen-Watt, who had been court-appointed to oversee Primarily Primates while the state of Texas determined who would ultimately be in charge of the facility.

On April 27, 2007, the state of Texas entered into a settlement agreement which removed Lee Theisen-Watt as overseer of Primarily Primates and replaced her with a board of directors that was headed by Eric Turton and Priscilla Feral. The settlement also dismissed all charges against Primarily Primates. Swett was required to leave the property and was prohibited from serving either on the board or as an employee in the future.

Oliver spent his last years with another chimpanzee, a gentle female known as Raisin. She was placed with Oliver for companionship since Oliver's advanced age and years in the research lab left him arthritic, mostly blind, and unable to interact daily with younger, more playful chimps at the sanctuary. News of Oliver as well as photos were often posted online by his caregivers, owing to public interest. He took part in regular enrichment activities including a watermelon smashing party documented in the Friends of Animals online newsletter, and even the chance to paint. Although elderly, Oliver had access to the outdoors and lived the rest of his life in quiet retirement. Oliver died in his sleep and was found on June 2, 2012, with Raisin next to him; he was at least 55 years old. Stephen René Tello, executive director of Primarily Primates, stated that Oliver would be cremated and his ashes spread on the grounds of the sanctuary.

In 1996, while Oliver was still housed by the Buckshire Corporation, a geneticist from the University of Chicago tested portions of his DNA, and revealed that he had the 48 chromosomes of a normal chimpanzee, disproving an earlier claim that he had 47 (chimps normally have 48 and humans normally have 46). In a separate study, Oliver's cranial morphology, ear shape, freckles, and baldness were found to fall within the range of variability exhibited by the common chimpanzee. Further genetic testing, published in the American Journal of Physical Anthropology, found that Oliver's mitochondrial DNA closely matched that of the central chimpanzee subspecies, which lives in the Republic of the Congo, Gabon, and other areas of Central Africa.

All content from Kiddle encyclopedia articles (including the article images and facts) can be freely used under Attribution-ShareAlike license, unless stated otherwise. Cite this article:
Oliver (chimpanzee) Facts for Kids. Kiddle Encyclopedia.