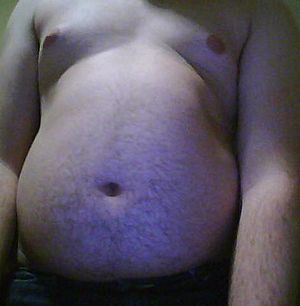 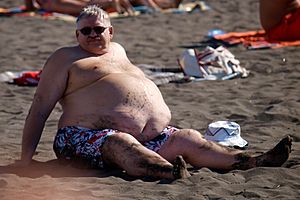 Overweight is the condition of a person when they have more fat in their body than what is thought as to be normal for their height.

To find out if a person is overweight, you can calculate their body mass index. People with a BMI of 25 or more are said to be overweight. Anything above 30 is said to be obese (very overweight). Overweight used to be a BMI of 27 or more. In 1998 this changed.

Doctors often tell overweight people that losing weight would be good for their health. People usually try to lose weight by eating less. This is called 'dieting'. They may exercise too. Dieting is often ineffective. 41% of dieters weigh more four to five years after the end of the diet than before it began.

Some people might use herbal teas, powders and pills to help to lower their mass.

Animals can also be overweight.

Overweight is not just associated with bad health. People think that being overweight means that a person is lazy or bad. Overweight people are often treated badly by other people for because of this. This is called fatphobia.

More than 1.4 billion adults are overweight in the world. The amount of overweight people is increasing.

All content from Kiddle encyclopedia articles (including the article images and facts) can be freely used under Attribution-ShareAlike license, unless stated otherwise. Cite this article:
Overweight Facts for Kids. Kiddle Encyclopedia.