The PATH , known as Port Authority Transit is a 13.8 mile 22.2 kilometers rapid transit system in the the northeastern New Jersey Cities of Newark , Harrison , Jersey City and Hoboken and Lower and Midtown Manhattan in New York City . It is operated as a wholly owned subsidiary of the Port Authority of New York and New Jersey. PATH trains run around the clock year around; four routes serving 13 stations operate during the daytime on weekends while two routes operate during weekends , late nights, and holidays. its tracks cross the Hudson River through century old cast iron tubes that rests on the river bottom under a thin layer of silt it operates as a deep level subway in Manhattan and the Jersey City/Hoboken riverfront; from Grove Street in Jersey City to Newark , trains run in open cuts , at grade level, and on elevated track. 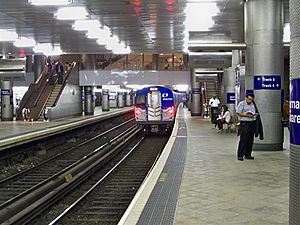 All content from Kiddle encyclopedia articles (including the article images and facts) can be freely used under Attribution-ShareAlike license, unless stated otherwise. Cite this article:
PATH Transit Facts for Kids. Kiddle Encyclopedia.