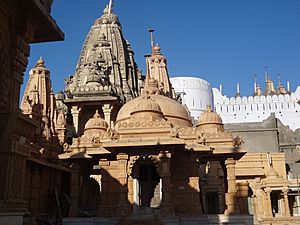 The Palitana temples or Shri Shatrunjaya Tirtha is a sacred by Svetambara Jains. The city of the same name, known previously as Padliptapur, has been dubbed "City of Temples". Shatrunjaya means a "place of victory against inner enemies" or "which conquers inner enemies". Jains believe that a visit to this group of temples is essential as a once-in-a-lifetime chance to achieve Nirvana or salvation.

As the temple-city was built to be an abode for the divine, no one is allowed to stay overnight, including the priests. It is the "National Jain temple of India" respectively.

Also, on the summit, there is a shrine of a Muslim saint by name Angar Pir who is reported to have protected the temples during Muslim invasions in early 14th century.

All content from Kiddle encyclopedia articles (including the article images and facts) can be freely used under Attribution-ShareAlike license, unless stated otherwise. Cite this article:
Palitana Jain Temples Facts for Kids. Kiddle Encyclopedia.