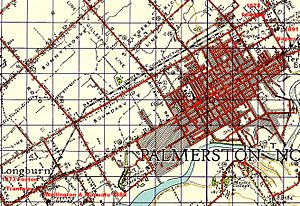 The original station was opened on 20 October 1876, when the Foxton Tramway was reopened as the Foxton Branch, though from 25 July 1873 the Square had been the terminus for the tramway. Traffic increased with the opening of the line to Napier via Woodville in 1891, and the station was moved 30 chains (2,000 ft; 600 m) south in March 1891. But it was still a bottleneck, and remained the longest-persisting bottleneck on the Main Trunk until replaced by the new Palmerston North railway station on the Milson Deviation on 21 October 1963. The first Auckland - Wellington through expresses ran on 14 February 1909, taking 19 hours 13 minutes, and stopping at Palmerston North.

All content from Kiddle encyclopedia articles (including the article images and facts) can be freely used under Attribution-ShareAlike license, unless stated otherwise. Cite this article:
Palmerston North Central railway station Facts for Kids. Kiddle Encyclopedia.