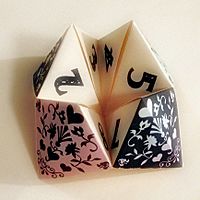 A fortune teller (also called a cootie catcher, chatterbox, salt cellar, whirlybird, or paku-paku) is a form of origami used in children's games. Parts of the fortune teller are labelled with colors or numbers that serve as options for a player to choose from, and on the inside are eight flaps, each concealing a message. The person operating the fortune teller manipulates the device based on the choices made by the player, and finally one of the hidden messages is revealed. These messages may purport to answer questions (hence the name) or they may be activities that the player must perform.

The same shape may also be used as pincers or as a salt cellar.

A paper fortune teller may be constructed by the steps shown in the illustration below: 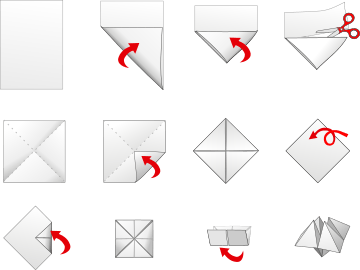 To use the fortune teller, the player telling the fortunes holds the four corners of the paper with index fingers and thumbs on both hands, keeping two pairs of corners together and the other two pairs separated so that only half of the internal sides of the corners are visible.

Manipulations are done by various similar methods, for example: The player asks a question of the person holding the fortune teller; this question will be answered by the device. The holder then asks for a number or color. Once the number or color is chosen, the holder uses their fingers to switch between the two groups of colors and numbers inside the fortune teller. The holder switches these positions a number of times: which may be determined by the number of letters in the color selected, the number originally chosen, or the sum of both. Once the holder has finished switching the positions of the fortune teller, the player chooses one of the flaps revealed. These flaps often have colors or numbers on them. The holder then lifts the flap and reveals the fortune underneath. Steps may be repeated to suit the users.

As well as being used to tell fortunes, these shapes may be used as a pincer to play-act catching insects such as lice, hence the "cootie catcher" name.

The "salt cellar" name refers to a different use for the same shape, in which it stands on a table with the four points downwards; the four open pockets may be used to hold small pieces of food.

In 2018, over 10,000 copies of this shape were used to create an installation resembling lava pouring from a building window, titled "ORIGAMI LAVA" (David Oliva + Anna Juncà), for the Lluèrnia festival in Olot, Spain.

All content from Kiddle encyclopedia articles (including the article images and facts) can be freely used under Attribution-ShareAlike license, unless stated otherwise. Cite this article:
Paper fortune teller Facts for Kids. Kiddle Encyclopedia.