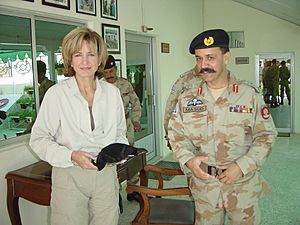 The paramilitary forces of Pakistan consist of various organizations constitutionally charged to safeguard Pakistan's national interests. They protect from threats that could come from other countries, like from India over the border dispute of Kashmir. They also protect citizens from threats that could come from inside the country. These threats started in 1971. They are currently made up from more than 300,000 workers.

Some divisions of the force are now incorporated under other organisations. For example, the Northern Light Infantry was a paramilitary force until 1999, when it became part of the Pakistan Army.

All content from Kiddle encyclopedia articles (including the article images and facts) can be freely used under Attribution-ShareAlike license, unless stated otherwise. Cite this article:
Paramilitary forces of Pakistan Facts for Kids. Kiddle Encyclopedia.