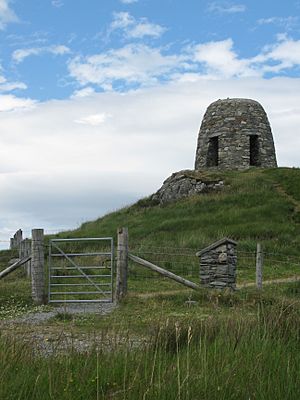 Monument to the Deer Raiders, Park

Park (Scottish Gaelic: A' Phàirc), also known as South Lochs, is a huge area of land connected to the rest of Lewis only by a narrow neck between Loch Seaforth and Loch Erisort. This had a wall called Gàrradh an Tighearna ("The Laird's Dyke") built across it by the Earl of Seaforth in the early 17th century, the outline of which can still be seen.

Only the north of Park is now inhabited: settlements in the south were cleared by Sir James Matheson in the nineteenth century. A famous deer raid took place here in 1887 as a demonstration by starving people, commemorated by a broch resembling a cairn at the Eishken junction. Much of this area is still used for deer stalking.

Loch Cromore, which has a slight salt water content, is good for wildfowl, including wintering whooper swans and common seals frequent the inlets. The deserted village of Stiomrabhagh is a short walk from Orinsay. Fine views of the Shiant Islands may be obtained from Lemreway and Orinsay.

All content from Kiddle encyclopedia articles (including the article images and facts) can be freely used under Attribution-ShareAlike license, unless stated otherwise. Cite this article:
Park, Outer Hebrides Facts for Kids. Kiddle Encyclopedia.