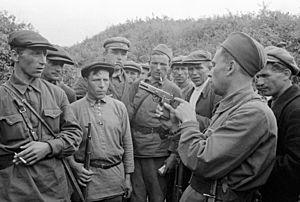 A guerrilla commander teaching his fighters to use weapons, near Smolensk, in 1941

A partisan is an armed fighter, who is not part of the regular troops of a country or state. The term comes from Italian, where it meant member of a political party. There is no separate legal status for partisans in international law. The law of war uses four criteria to legally define someone as a prisoner of war, if the person is captured:

In 1977, there were two additional protocols: They clarified that it is sufficient to carry the weapons openly only on some occasions, to be titled armed combatant.

All content from Kiddle encyclopedia articles (including the article images and facts) can be freely used under Attribution-ShareAlike license, unless stated otherwise. Cite this article:
Partisan Facts for Kids. Kiddle Encyclopedia.