Penstemon digitalis (known by the common names foxglove beard-tongue, foxglove beardtongue, talus slope penstemon, and white beardtongue) is a species of flowering plant in the plantain family, Plantaginaceae. The flowers are white and are borne in summer. It is native to eastern Canada and the eastern and southeastern United States. 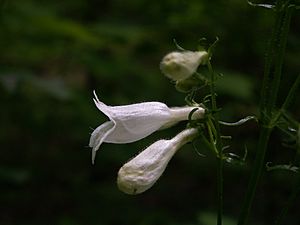 Penstemon digitalis is a glabrous 3 to 5 foot tall herbaceous plant with opposite, shiny green, simple leaves, on slender, purple stems. The leaves are up to 5 inches long. While upright, the stems average anywhere from 2 to 3 feet tall. The flowering panicle extends to almost one third of the plant's height and has pairs of branches which repeat with two flowers multiple times. The pedicels are almost one fourth of an inch long and produce 1.25 inch long two-lipped tubular flowers over dark green foliage. The flowers have tiny white hairs on the outside of the tube. The plant has elliptic basal leaves and lance-shaped to oblong stem leaves.

The Latin word digitalis means "finger-like": the flowers resemble fingers of a glove. The plant grows in moist, sandy soil in full sun in meadows, prairies, fields, wood margins, open woods and along railroad tracks. Its bloom period is from late spring to early summer. The plant is known to attract butterflies and birds such as hummingbirds. It tolerates deer browsing. Native states for P. digitalis include Iowa, Nebraska, and Missouri although it is less common in Iowan native prairies compared to other Penstemon species.

Like other Penstemon species, it is used in roadside planting because it is easily grown and showy. It is recommended for easy use in gardens from the Midwest to the Atlantic coast and Pacific Northwest by the American Penstemon Society. Iowa's Living Roadway Profiler from the Iowa Department of Transportation says that the plant's "decorative seed capsules add interest in the fall and winter".

Penstemon 'Dark Towers' is a hybrid between Penstemon digitalis 'Husker Red' and Penstemon 'Prairie Splendor' (which in turn is a hybrid of Penstemon cobaea and Penstemon triflorus). The hybrid has tubular pink flowers that grow up to 1.5 inches tall, red foliage, and is 1.5 feet to 3 feet tall. Although Dark Towers is similar to Husker Red, its red foliage is darker than that of the Husker Red cultivar and has more height. It also stays red for a longer time in the summer. Dale Lindgren created and named both Husker Red and Dark Towers at the University of Nebraska in 1983. Lindgren decided to create Husker Red because of its purplish-red foliage.

All content from Kiddle encyclopedia articles (including the article images and facts) can be freely used under Attribution-ShareAlike license, unless stated otherwise. Cite this article:
Penstemon digitalis Facts for Kids. Kiddle Encyclopedia.