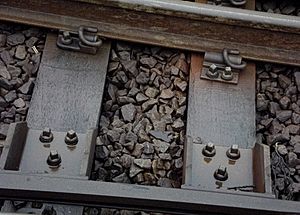 The permanent way is the elements of railway lines: generally the pairs of rails typically laid on ties ("sleepers" in British parlance) embedded in ballast, intended to carry the ordinary trains of a railway. It is described as permanent way because in the earlier days of railway construction, contractors often laid a temporary track to transport spoil and materials about the site; when this work was substantially completed, the temporary track was taken up and the permanent way installed.

All content from Kiddle encyclopedia articles (including the article images and facts) can be freely used under Attribution-ShareAlike license, unless stated otherwise. Cite this article:
Permanent way Facts for Kids. Kiddle Encyclopedia.