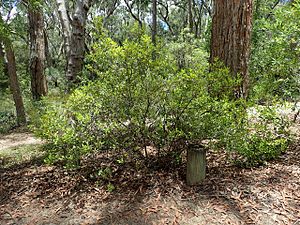 Persoonia rufa is a species of flowering plant in the family Proteaceae and is endemic to the a restricted area of New South Wales. It is an erect to spreading shrub with hairy young branchlets, elliptic leaves, and yellow flowers borne in groups of up to twelve on a rachis up to 110 mm (4.3 in), each flower with a leaf at its base.

Persoonia rufa was first formally described in 1991 by Peter H. Weston and Lawrie Johnson from a specimen collected in the Gibraltar Range National Park in 1990 and the description was published in Telopea. The specific epithet (rufa) refers to the reddish hairs on the young branchlets.

This geebung is restricted to the Gibraltar Range National Park where it grows in eucalypt forest on soils derived from granite.

All content from Kiddle encyclopedia articles (including the article images and facts) can be freely used under Attribution-ShareAlike license, unless stated otherwise. Cite this article:
Persoonia rufa Facts for Kids. Kiddle Encyclopedia.