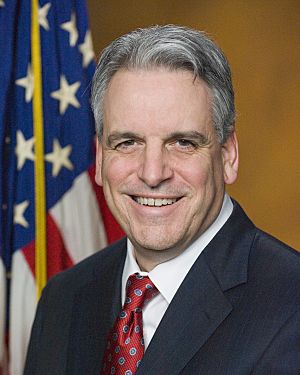 Peter F Neronha, US Attorney for the District of Rhode Island

Peter F. Neronha was appointed by President Barack Obama as the United States Attorney for the District of Rhode Island on September 16, 2009. In his capacity as chief federal law enforcement officer for Rhode Island, Mr. Neronha supervises the prosecution of federal crimes and the litigation of civil matters in which the federal government has an interest either as a plaintiff or defendant.

All content from Kiddle encyclopedia articles (including the article images and facts) can be freely used under Attribution-ShareAlike license, unless stated otherwise. Cite this article:
Peter F Facts for Kids. Kiddle Encyclopedia.