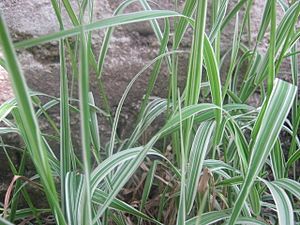 A variegated form of Phalaris arundinacea in the garden of Islington College, Nepal

Phalaris arundinacea, or reed canary grass, is a tall, perennial bunchgrass that commonly forms extensive single-species stands along the margins of lakes and streams and in wet open areas, with a wide distribution in Europe, Asia, northern Africa and North America. Other common names for the plant include gardener's-garters in English, alpiste roseau in French, rohrglanzgras in German, kusa-yoshi in Japanese, caniço-malhado in Portuguese, and hierba cinta and pasto cinto in Spanish.

The stems can reach 2 metres (6.6 ft) in height. The leaf blades are usually green, but may be variegated. The panicles are up to 30 centimeters long. The spikelets are light green, often streaked with darker green or purple. This is a perennial grass which spreads underground by its thick rhizomes.

A number of cultivars of P. arundinacea have been selected for use as ornamental plants, including variegated (striped) cultivars – sometimes called ribbon grass – such as 'Castor' and 'Feesey'. The latter has a pink tinge to the leaves. When grown, although drought-tolerant, it likes abundant water and can even be grown as an aquatic plant.

Reed canary grass grows well on poor soils and contaminated industrial sites, and researchers at Teesside University's Contaminated Land & Water Centre have suggested it as the ideal candidate for phytoremediation in improving soil quality and biodiversity at brownfield sites.

The grass can also easily be turned into bricks or pellets for burning in biomass power stations. Furthermore, it provides fibers which find use in pulp and papermaking processes.

P. arundinacea is also planted as a hay crop or for forage.

In many places, P. arundinacea is an invasive species in wetlands, particularly in disturbed areas. It has been reported as an invasive weed in floodplains, riverside meadows, and other wetland habitat types around the world. When P. arundinacea invades a wetland, it inhibits native vegetation and reduces biological diversity. It alters the entire ecosystem. The grass propagates by seed and rhizome, and once established, is difficult to eradicate.

P. arundinacea now has world-wide distribution. It is regarded as native to both North America and Eurasia, but this is debated and it appears that the populations in North America are made up of a mixture of cultivars of both those that were introduced from Europe and indigenous varieties.

All content from Kiddle encyclopedia articles (including the article images and facts) can be freely used under Attribution-ShareAlike license, unless stated otherwise. Cite this article:
Phalaris arundinacea Facts for Kids. Kiddle Encyclopedia.