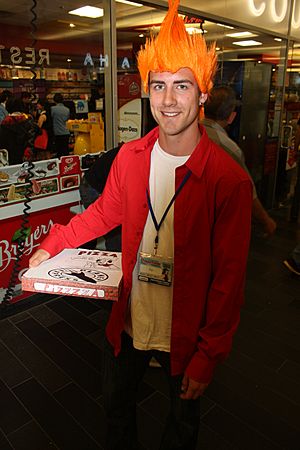 A cosplayer dressed up as Fry.

Philip J. Fry, (born August 14, 1974) commonly known as Fry, is a fictional character and one of the main characters of the animated sitcom Futurama.

Fry was born in New York with a family. He became a pizza delivery boy for Panucci's Pizza. On December 31st, 1999, he was supposed to give pizza and beer to someone named I.C. Weiner at the cryogenic lab. He noticed no one was there and accidentally landed on a cryopod. He woke up a thousand years later and met Turanga Leela. He was afraid of getting a career chip as a delivery boy.

Billy West based his voice off of his 25 year old self.

All content from Kiddle encyclopedia articles (including the article images and facts) can be freely used under Attribution-ShareAlike license, unless stated otherwise. Cite this article:
Philip J. Fry Facts for Kids. Kiddle Encyclopedia.