A Pickett-Hamilton fort is a type of hardened field fortification built in Britain during the invasion crisis of 1940–1941. The Pickett-Hamilton fort was designed to be lowered into the ground while it was not in use, to become inconspicuous and not interfere with the passage of taxiing aircraft or other vehicles. The fort could be raised to about 2 feet 6 inches (0.76 m) above ground level where it would be a physical impediment to aircraft and vehicles and from where a small crew could fire with rifles or light machine guns. 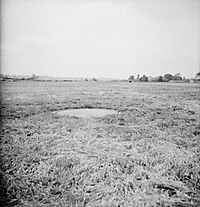 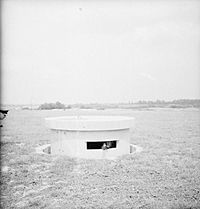 The most common version of the Pickett-Hamilton fort consists of two cylinders of pre-cast concrete each with one end closed. The slightly smaller of the two cylinders slides into the larger and they are kept apart by small guard rollers on the moving part that engaged with grooves. The structure is buried so that the overhanging top of the smaller cylinder lies flush with the ground. Closed in this position the pillbox is inconspicuous and allows aircraft and other vehicles to safely drive straight over it.

The interior is accessed via a small hatch and rungs built into the structure. To bring it into action a lifting mechanism was used to raise the inner cylinder by about 2 feet 6 inches (0.76 m) thereby revealing three embrasures. A crew of two men could then operate the fort as a pillbox.

Initially, the lifting mechanism consisted of a standard 8-ton aeroplane jack that took three minutes to raise the fort. This was soon replaced with a pneumatic ram that was based on a system originally intended for agricultural use. The pneumatic system operated with compressed air stored in cylinders: this allowed the fort to be raised and lowered quickly when speed was essential. A hand pump was also provided to raise the fort for daily maintenance or as a backup method.

An alternative design used counterbalance weights to raise the fort. This allowed the fort to be raised by the physical strength of the garrison. This design had two access hatches and, with a slightly larger underground chamber and the elimination of the central pneumatic ram the fort could have a crew of four men. Under consideration in late 1940, this alternative design was not used in significant numbers and only about a dozen were installed. 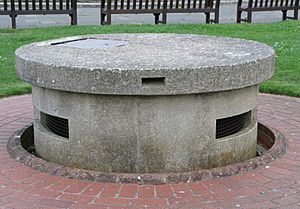 A Pickett Hamilton fort in Southsea

The forts were prone to flooding and they were not sufficiently strong to bear the weight of the heavy aircraft developed during the war. Consequently, many forts were moved to the periphery of airfields and are not in their original location. More recently, some forts have been moved as airfields have been developed for modern aircraft. Records show that there were 335 installations. Forty-eight examples of this type remain extant.

A number of forts are displayed at Museums: Tangmere Military Aviation Museum, Lashenden Air Warfare Museum, D-Day Museum, Southsea (moved from its original location) and an inner part only at the Imperial War Museum Duxford.

Because they retract into the ground inconspicuously, many examples have been lost and rediscovered many years later.

The management of Kent International Airport (formerly RAF Manston) donated a Pickett-Hamilton fort to Lashenden Air Warfare Museum. Most of the surviving forts are flooded but the fort at Manston was dry and in superb condition. The fort was excavated and restored to working order by museum members over a period of 18 months. Although the fort was originally intended to be buried on an airfield there was concern that putting it in the ground might, over time, degrade the concrete. Therefore, the fort has been placed at ground level and surrounded with a cone of earth and sandbags. The lifting mechanism is in working order and can be activated by visitors putting a coin into a slot. This is the only fully restored Pickett-Hamilton fort.

All content from Kiddle encyclopedia articles (including the article images and facts) can be freely used under Attribution-ShareAlike license, unless stated otherwise. Cite this article:
Pickett-Hamilton fort Facts for Kids. Kiddle Encyclopedia.