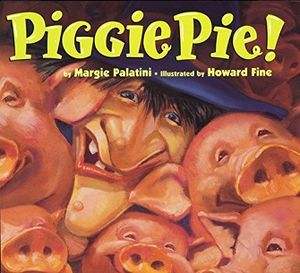 Piggie Pie is a 1995 children's picture book by Margie Palatini.

Gritch the Witch wants to make one of her favorite meals - piggie pie - but she lacks the crucial ingredients of piggies. Heading to Old McDonald's Farm she attempts to find some piggies, but is foiled when the pigs dress up as various barnyard creatures and even Old McDonald. Foiled, she stumbles upon the Big Bad Wolf and the two head to Gritch's house each thinking they will eat the other for lunch.

All content from Kiddle encyclopedia articles (including the article images and facts) can be freely used under Attribution-ShareAlike license, unless stated otherwise. Cite this article:
Piggie Pie Facts for Kids. Kiddle Encyclopedia.