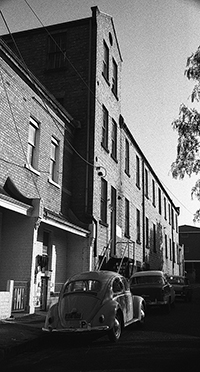 Pinacotheca (1967–2002) was a gallery in Melbourne, Australia. Established in 1967 by Bruce Pollard (b. 1936), it was ideologically committed to the avant-garde and represented a new generation of artists interested in post-object, conceptual and other non-traditional art forms.

He relocated it to Bedggood's Shoe Factory, at 10 Waltham Place, Richmond, Melbourne in June 1970. An early owner of the building was notorious entrepreneur D.J. Henry 'Money' Miller.

The gallery closed in October 1999 but re-opened in August 2002 for its very last exhibition, then closed permanently.

After the demise of John Reed's Museum of Modern Art Australia in 1966, Pinacotheca became the only gallery in Melbourne showing experimental work in the late 1960s and 1970s, exhibiting works by Art Language artists Ian Burn, Roger Cutforth and Mel Ramsden, and Dale Hickey’s ironic 1969 work in which he commissioned a fencing contractor to install suburban-style fences of unpainted planks around the walls, of different heights tailored to the gallery’s three separate rooms; the first only knee-high, the second intermediate and the third about chin level.

Pinacotheca's exhibitors were in the vanguard of Conceptualism; during The Field, the controversial show of Australian conceptual abstraction that opened the new premises of the National Gallery of Victoria in St. Kilda Road, Pinacotheca, then in St Kilda, and concurrently with the NGV show, advertised 'for viewing' 15 of The Field artists in its stockroom alongside a solo by Rollin Schlicht; then in the next year, Joseph Kosuth coordinated the "exhibition" of part of his Second Investigation at several international galleries, each chosen as being adventurous venues showing conceptual art, that included the Pasadena Art Museum, Leo Castelli Gallery (New York), and Pinacotheca. The work was initiated by, and was executed in, Kosuth's request of the gallery directors to advertise his Second Investigation in newspapers, with any further action being left to them. Bruce Pollard placed Kosuth’s statements as advertisements in national newspapers, including The Age, The Sun News-Pictorial, and Newsday from his own funds.

Already by 1970 Pinacotheca Gallery in Melbourne was a focus for reflective, quiet concern with everyday life, its processes and its visual banalities, as in the work of Robert Rooney and Dale Hickey. Watters Gallery in Sydney was a centre for the rougher, more casual, funky art of Mike Brown, Tony Coleing and John Armstrong. Inhibodress Sydney, 1970–72 was the place to see conceptual art, body art, performance and video by Mike Parr and Peter Kennedy.

Its spacious accommodation in Richmond was in impression not unlike a New York SoHo loft, and supported a similar sensibility;

"...a large concrete expanse, broken by scrubbed wooden pillars lay beyond the forbidding metal door. It was austerity and doggedness in timber, bricks and mortar, the aesthetic was primitive and cool, the art work was stripped of anything reassuring, and if the lights were off the visitor was expected to turn them on...Clive Murray White described the aesthetic of the gallery as having the "air of New York: if you took a photograph of your work, it would look like a major international avant-garde show."

Its ambience was well suited to the display of large works by Peter Booth, Dale Hickey, Robert Hunter and Robert Rooney who were some of the first artists represented there, in a group exhibition.

In 1971–72 the gallery operated as an artists' cooperative of around twenty, including Robert Hunter, Bill Anderson, Jonas Balsaitis, Peter Booth, Dale Hickey, Simon Klose and Robert Rooney, while Pollard was travelling overseas. During this period Mike Brown, Kevin Mortenson and Russell Drever, with numbers of others held the Dada-ist happening The Opening Leg Show Party-Bizarre. Patrick McCaughey, The Age art critic, described it as "more or less, according to taste, than clean good fun"

Pollard's early attitude to representing women artists was exposed in 1975 when Kiffy Rubbo, curator (1971–1979) at the avant-garde George Paton/Ewing Gallery asked Lesley Dumbrell to escort Lucy Lippard, a feminist critic of Pop Art and Minimalism who was then visiting from the United States as part of celebrations for International Women’s Year. They visited galleries including Pinacotheca. When Pollard invited Lippard to view the stock room, she explained she was interested only in seeing women artists and he was unable to show her any. Pollard took umbrage and Lippard walked out, after berating him.

Over its 33-year history, more than 300 artists showed at Pinacotheca, including significant and challenging art by Australians Rosalie Gascoigne, James Gleeson, Bill Henson, Tim Johnson, Tony Tuckson and Stelarc. Ti Parks was the last artist to show there in August 2002.

An example of the often hermetic austerity of some exhibitions was Hunter's 1970 solo show for which he stencilled 11 grids onto the gallery's walls with grey paint, explaining later that : "I want to make something alien - alien to myself" and described his intention to avoid the creation of objets d'art. As minimal and more cryptic still, conceptually, was Robert Rooney/Simon Klose (Collaboration), from 10–20 August 1972, consisting of banks of deadpan photographic prints of urban landscape and interiors, with bluestone pitchers installed in grids on the gallery floor. Critic Patrick McCaughey, announced it a symptom of ‘the demise of the avant-garde into the easy, the predictable, the familiar,’ while Alan McCulloch reported that it was 'Everything or Perhaps Nothing.' They were unaware that the defiant conceptual premise of the show was Klose's proposition that the pair should each produce work for the other—in the other's style and presenting it as theirs—and yet reveal the fact to no-one, even the critics, when questioned by visitors to the gallery, bar a few intimate friends.

In an anti-establishment gesture, documentation and catalogues were deliberately kept to a minimum and consequently parts of Pinacotheca's exhibition history is limited and some dates of shows are only approximate, while precise details are being assembled by Trevor Fuller, custodian and convenor of the Pinacotheca archive project.

All content from Kiddle encyclopedia articles (including the article images and facts) can be freely used under Attribution-ShareAlike license, unless stated otherwise. Cite this article:
Pinacotheca, Melbourne Facts for Kids. Kiddle Encyclopedia.