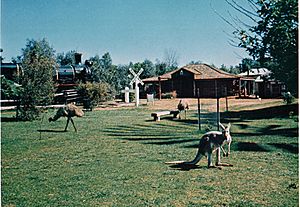 The Pioneer Settlement, in Swan Hill, Victoria, is Australia's first open-air museum, portraying life on the Murray in the era 1830-1930. It opened in 1966 as the Swan Hill Folk Museum, before being renamed, following a visit by the Queen in 1970. It contains approximately 50 replica buildings, including Masonic hall, coach-house, post office, photographic studio, original 1895 kaiserpanorama, and newspaper office. The collection also contains numerous tractors – including the first tractor ever brought to Australia – and historic vehicles, and two 19th century riverboats, including the 1876 paddlesteamer PS Gem. This vessel was towed to the site in 1963, and now functions as the main entrance and contains a restaurant.

In 1994 an act of Parliament brought the Settlement under the control of the Swan Hill City Council.

All content from Kiddle encyclopedia articles (including the article images and facts) can be freely used under Attribution-ShareAlike license, unless stated otherwise. Cite this article:
Pioneer Settlement Facts for Kids. Kiddle Encyclopedia.