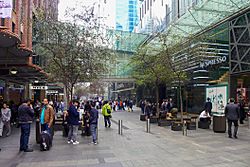 Pitt Street Mall is the pedestrianised section of Pitt Street in the Sydney central business district, in the Australian state of New South Wales. Running for approximately 200 metres between Market Street and King Street, it is one block long and one of Australia's busiest and most cosmopolitan shopping precincts. Floorspace rents are the highest in Australia, in part due to other cities' shopping precincts being longer. In 2015, its rents were the fifth-highest in the world in terms of city streets.

Despite its small size, Pitt Street Mall hosts many flagship chain stores and more than 400 specialty stores. It is one of the flagship venues of Sydney Fashion Week held in the month of May.

Formerly a vehicular street, the mall was closed off to traffic in the 1990s and became a pedestrian mall. This was commonplace in various Australian cities at the time, in an effort to encourage "walk-in" business. Many prominent Australian businesses had flagship stores along Pitt Street, namely Sportsgirl and Angus & Robertson. In the mid 2000s, there were attempts to make the mall a completely pedestrian thoroughfare, diverting all vans and trucks to the underground corridor from underground corridor from King Street to Market Street, at the south of the mall.

Along with extensive upgrades to retail areas, the Pitt Street Mall's pedestrian area saw a A$10 million refurbishment during 2010-11. This included the provision of new seating as well as new pavers and a catenary lighting system.

All content from Kiddle encyclopedia articles (including the article images and facts) can be freely used under Attribution-ShareAlike license, unless stated otherwise. Cite this article:
Pitt Street Mall Facts for Kids. Kiddle Encyclopedia.