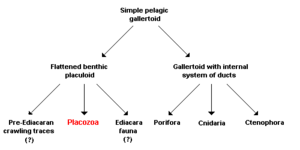 The Placozoa descending side by side with the sponges, cnidarians and ctenophores from a gallertoid by processes of differentiation

The Placozoa are an animal phylum, a primitive form of invertebrate. They are the simplest in structure of all (metazoa).

The Placozoa has only one species, Trichoplax adhaerens. There is enough genetic diversity that it is possible that there are multiple, morphologically similar species.

Although they were first discovered in 1883, a common name does not exist for the taxon. The scientific name literally means "flat animals".

Trichoplax is a small, flattened, animal around a millimetre across. Like an Amoeba, it has no regular outline, although the upper surface is always flattened. The body consists of an outer layer of simple epithelium enclosing a loose sheet of cells. The epithelial cells bear flagella, which the animal uses to help it creep along the seafloor. Between these layers is the fiber syncytium, a liquid-filled cavity strutted open by star-like fibers.

Trichoplax feed by absorbing food particles—mainly microbes—with their underside. They generally reproduce asexually, by dividing or budding, but can also reproduce sexually. Though Trichoplax has a small genome in comparison to other animals, nearly 87% of its 11,514 protein-coding genes are similar to known genes in other animals.

In the 1960s and 1970s renewed interest among researchers led to the discovery that the animals people had been studying are adults, not larvae. This newfound interest also included study of the organism in nature (as opposed to aquariums).

All content from Kiddle encyclopedia articles (including the article images and facts) can be freely used under Attribution-ShareAlike license, unless stated otherwise. Cite this article:
Placozoa Facts for Kids. Kiddle Encyclopedia.