This diagram shows how Planetshine works. 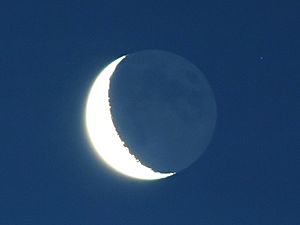 Earthshine reflecting off the Moon. The bright region is directly lit by the sun. The rest of the Moon is illuminated by light reflected off the Earth.

The phenomenon known as planetshine happens when sunlight from a planet lights the dark side of one of its moons. The best known example of planetshine is Earthshine.

All content from Kiddle encyclopedia articles (including the article images and facts) can be freely used under Attribution-ShareAlike license, unless stated otherwise. Cite this article:
Planetshine Facts for Kids. Kiddle Encyclopedia.