Plantago media, known as the hoary plantain, is a species of flowering plant in the plantain family Plantaginaceae. It is native to central and western Europe, including Great Britain and introduced to parts of the north-east United States. Its generic name is derived from the Latin for sole; like other members of the genus Plantago, it should not be confused with the unrelated plantain, a starchy banana. 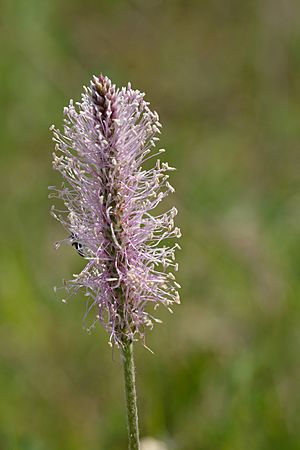 Plantago media grows in damp grassy meadows up to an altitude of 2000 m. A slender stalk of between 5 and 50 cm develops from a basal rosette of finely-haired leaves. Delicate pink-white flowers are borne between May and September. P. media is hermaphrodite and is pollinated by wind or insects, particularly bees.

Plantago media is native to Eurasia. It is native to eastern England, but scarce in Scotland and Ireland. It is calcicole, characteristic of soils on chalk or limestone, growing in grassland, meadows, lawns and waste places.

The plant is edible. Archeological finds testify to its use during the Roman era in Britain.

All content from Kiddle encyclopedia articles (including the article images and facts) can be freely used under Attribution-ShareAlike license, unless stated otherwise. Cite this article:
Plantago media Facts for Kids. Kiddle Encyclopedia.