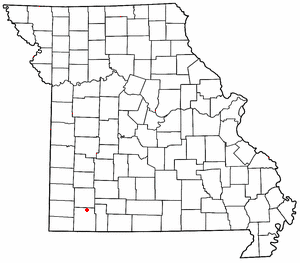 Pleasant Ridge is an unincorporated community in northern Barry County, Missouri. It is located on Missouri Supplemental Routes Z and VV, eight miles east of Monett. Community boundaries extend approximately 0.5 mile east and west of Route VV along Route Z, and 0.5 to 1.0 miles north and south of Route Z along Routes VV and its farm road extension to the north.

Local farms, according to residents, grew cucumbers and blueberries, specifically in the bottom land found to the southwest of the community center.

The Tom Town Historic District was added to the National Register of Historic Places in 1989.

All content from Kiddle encyclopedia articles (including the article images and facts) can be freely used under Attribution-ShareAlike license, unless stated otherwise. Cite this article:
Pleasant Ridge, Barry County, Missouri Facts for Kids. Kiddle Encyclopedia.