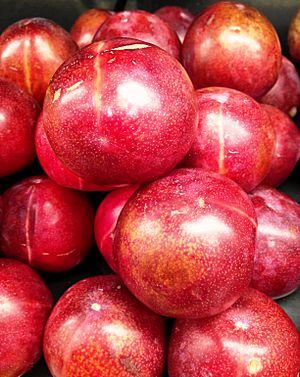 The plumcot is a hybrid fruit. A plumcot is part plum and part apricot. There are many different types of plumcot. Some of them are about half plum and half apricot, while others are mostly plum. One well-known type of plumcot is called the pluot, which is a trademarked name for plumcots that were developed in the 1980s by Floyd Zaiger. The first plumcots were bred in the late 1800s by Luther Burbank.

All content from Kiddle encyclopedia articles (including the article images and facts) can be freely used under Attribution-ShareAlike license, unless stated otherwise. Cite this article:
Plumcot Facts for Kids. Kiddle Encyclopedia.