Polystichum proliferum is a terrestrial fern that can grow to 130 cm in height. The rhizome and frond bases are covered in persistent scales which are glossy brown with pale edges. Fronds can reach up to 100 cm in length and 30 cm wide, are dark green when mature but lighter and paler when young. Sori (spore clusters) occur in rows on either side of the midrib and are covered with by a large umbrella-like indusium (protective covering) hence the common name “mother shield fern”. 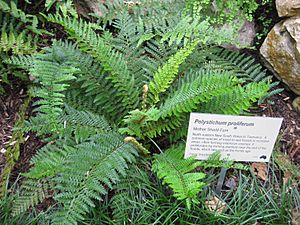 Polystichum proliferum will propagate vegetatively via proliferous buds or sexually through spores. Vegetative reproduction occurs when bulbils develop at end of the larger fronds grows into small plant. As the weight of the bulbil increases, the frond sags until the bulbil can take root in the soil underneath. This characteristic allows Polystichum proliferum to colonise large areas vegetatively, often becoming the dominant ground cover after a disturbance and is a desirable trait for those who cultivate the species in home gardens. 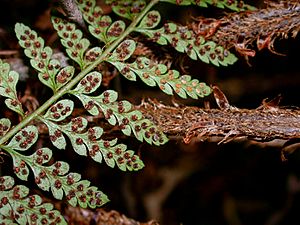 All content from Kiddle encyclopedia articles (including the article images and facts) can be freely used under Attribution-ShareAlike license, unless stated otherwise. Cite this article:
Polystichum proliferum Facts for Kids. Kiddle Encyclopedia.