The Ponchartrain Apartments was an apartment building located at 1350 East Jefferson Avenue in Detroit, Michigan. It was also known as the Renaissance Apartments. It was listed on the National Register of Historic Places in 1985, but subsequently demolished. 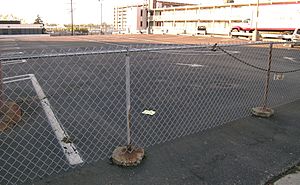 Parking lot where the Ponchartrain Apartments once stood

The Ponchartrain Apartment building was a four-story red brick structure sitting atop a limestone foundation. Window sills, coping, and a belt course between the first and second stories were also constructed of limestone. The entrance sat in an arched opening flanked by ornamental pilasters supporting the lintel. Swags and urns decorate the entablature, and urns also graced the stone relief panels beneath the end windows. The building contained 74 apartments.

All content from Kiddle encyclopedia articles (including the article images and facts) can be freely used under Attribution-ShareAlike license, unless stated otherwise. Cite this article:
Ponchartrain Apartments Facts for Kids. Kiddle Encyclopedia.