Poverty in India facts for kids 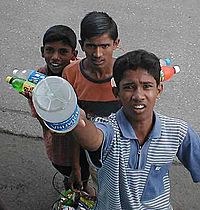 the poverty in India is an important issue in the nation. India has some of the poorest people in the world. As per the Government of India, the Poverty line for rural areas is Rs 672.8 per month and Rs 859.6 in rural areas, means that many people do not have enough money. In 2012, the latest report by the Planning Commission of India (Tendulkar Committee) reported that 26% of all people in India fall below the international poverty line of US$ 1.25 per day. Over the last decade, poverty has been witnessed a consistent decline with the levels dropping from 37.2% in 2004-05 to 29.8% in 2009-10. The number of poor people is now estimated at 250 million.

There are two views on the cause of poverty in India.

All content from Kiddle encyclopedia articles (including the article images and facts) can be freely used under Attribution-ShareAlike license, unless stated otherwise. Cite this article:
Poverty in India Facts for Kids. Kiddle Encyclopedia.