Pratt Institute Libraries is the academic library system of Pratt Institute. The main library is located on the main campus in Brooklyn, NY, with a branch library in Manhattan. The collection focus includes the arts, architecture, design, information science and allied fields. Holdings include 200,000 printed volumes, over 600 periodicals, rare books, digital images resources including Pratt Institute specific Digital Image Collection, and the Institute's archives. It has the distinction of being the “first free public library in Brooklyn” and its Brooklyn building is a New York City designated landmark.

The library at Pratt Institute opened in 1888 in the Main Building on Pratt's campus in the Clinton Hill neighborhood of Brooklyn. The library moved into a new building located on Ryerson Street in May 1896. Originally called the Pratt Institute Free Library, it was open to anyone who lived or worked in Brooklyn. Branch libraries of the Pratt Institute Free Library included the Astral Branch—located on the ground floor of the Astral Apartments (another Charles Pratt initiative), and the Long Island Branch at 571 Atlantic Ave. By 1940 the Pratt Libraries closed to the public, partly because the Brooklyn Public Library was able to support the needs of the community. 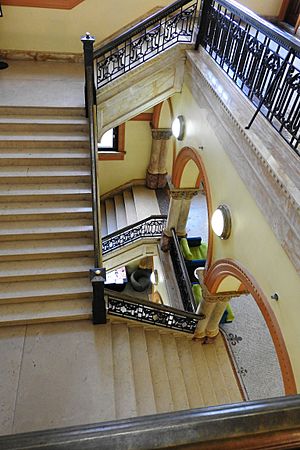 Stairwell of the library

The building was designed by William B. Tubby, with interiors by Tiffany & Company. The three-story brick building was designed in a Renaissance Revival style. A feature of the interior is a marble staircase and pillars. The floors of the book stacks are made of glass and the stacks are a design by Library Bureau, which include oak shelves and copper-plated iron supports. Early renovations included the addition of a Children's Porch in 1912 to provide direct access to the Children's Room. The North Porch was added in the 1930s by architect John Mead Howells. Renovations in the early 1980s by architects Giorgio Cavaglieri and Warren Gran included the removal of the Children's Porch to another building on campus, an underground extension including additional stacks, study areas, and classroom with an outdoor mall above, and the addition of a climate-control system. In 1981 the library building in Brooklyn was officially designated a New York City Landmark by the New York City Landmarks Preservation Commission.

All content from Kiddle encyclopedia articles (including the article images and facts) can be freely used under Attribution-ShareAlike license, unless stated otherwise. Cite this article:
Pratt Institute Libraries Facts for Kids. Kiddle Encyclopedia.