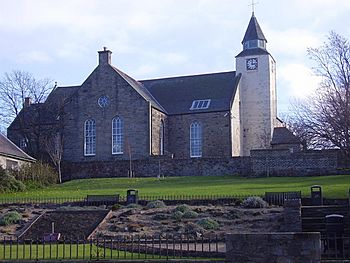 Prestongrange Parish Church is a Church of Scotland kirk situated in the small, former mining town of Prestonpans in East Lothian. The church was built in 1596, one of the first churches to be built in Scotland following the Scottish Reformation in 1560. In 1606, Prestonpans was created a parish in its own right following centuries of being part of the parish of Tranent.

There had been a church to the south of Prestonpans, since the 12th century which was administered by the canons of Holyrude Abbey but that church, situated in the vicinity of Northfield House was destroyed by the earl of Hertford in 1544 during the Rough Wooing campaign against the Scots following the Scots' refusal to allow Princess Mary of Scotland. (the to-be Mary, Queen of Scots) marry Henry's son, Prince Edward.

John Davidson, formerly of Liberton in Edinburgh was appointed first minister at the new church and financed the building of the church out of his own means. The land was gifted by the Hamilton family, the lairds of Preston. The Rev. Davidson was an outspoken man and was never afraid to criticise bishops when the need arose and even criticised the king, James VI of Scots. The good minister spent time in prison in Edinburgh in 1601 and, on his release, was banned from leaving the parish for life. The church, since 1596, has been served by 27 ministers. William Carlyle, father of Jupiter Carlyle, was minister at the time of the Battle of Prestonpans on September 21. 1745 and he wrote a report of the engagement having witnessed it from the church tower. William Cunningham was minister when the churches split in 1843. The Rev. J. Struthers was minister for 45 years around the end of the 19th century and the early 20th century. Moira Herkes was the first lady minister at Prestonpans when she arrived in 1988.

The church was extensively refurbished in 1774 and again in 1891 forming the edifice we see today. Only the clock tower and some surrounding masonry remains from the original 1596 church; the outline of the original west gable end can still be seen inside the roof.

There are many interesting and intriguing grave stones in the kirkyard where a number of former ministers and even soldiers from the Battle of Prestonpans are buried.

All content from Kiddle encyclopedia articles (including the article images and facts) can be freely used under Attribution-ShareAlike license, unless stated otherwise. Cite this article:
Prestongrange Parish Church Facts for Kids. Kiddle Encyclopedia.