Prumnopitys ferruginea, commonly called miro, is an evergreen coniferous tree which is endemic to New Zealand. Before the genus Prumnopitys was distinguished, it was treated in the related genus Podocarpus as Podocarpus ferrugineus.

It grows up to 25 m high, with a trunk up to 1.3 m diameter. The leaves are linear to sickle-shaped, 15–25 mm long and 2–3 mm broad, with downcurved margins. The plants are dioecious with pollen cones being solitary while those of female plants hang from a curved, scaly stalk. The seed cones are highly modified, reduced to a central stem 2–3 cm long bearing 1-3 scales, each scale maturing berry-like, oval, about 20 mm long and 10–15 mm broad, red to purple-red with a soft edible pulp covering the single seed. The seeds are dispersed by the New Zealand pigeon, which eats the very conspicuous 'berries' and passes the seeds in its droppings. It is found growing on both lowland terrain and on hill slopes throughout the two main islands as well as on Stewart Island/Rakiura (47° S). The Tree can live for at least 600 years.

The scientific name ferruginea derives from the rusty colour of dried herbarium specimens of the leaves.

Miro is distinguished from the related, and (initially) very similar looking matai (Prumnopitys taxifolia) in four aspects of its anatomy; its cones, bark, seeds and leaves. 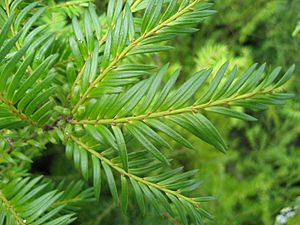 All content from Kiddle encyclopedia articles (including the article images and facts) can be freely used under Attribution-ShareAlike license, unless stated otherwise. Cite this article:
Prumnopitys ferruginea Facts for Kids. Kiddle Encyclopedia.