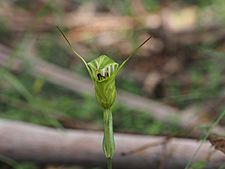 Pterostylis metcalfei was first formally described by David L. Jones in 1997 from a specimen collected by Peter Metcalfe on Doughboy Mountain, about 10 km (6 mi) south of Wongwibindi station, on the road to Wollomombi, on 8 May 1994. The description was published in The Orchadian. In 2002, Jones and Clements transferred the species to the genus Diplodium but the move has not been accepted by the National Herbarium of New South Wales nor by the Royal Botanic Gardens, Kew. The specific epithet (metcalfei) honours the collector of the type specimen, Peter Metcalfe.

The species is endemic to the New England Tablelands (biogeographic region) at altitudes of 1,000 to 1,350 m (3,000 to 4,000 ft). It is found on ridges and slopes with well drained soil derived from granite and basalt, growing among grass and shrubs. It is known from only three locations, only one of which is in a national park, so that it is threatened by cattle grazing and trampling.

All content from Kiddle encyclopedia articles (including the article images and facts) can be freely used under Attribution-ShareAlike license, unless stated otherwise. Cite this article:
Pterostylis metcalfei Facts for Kids. Kiddle Encyclopedia.