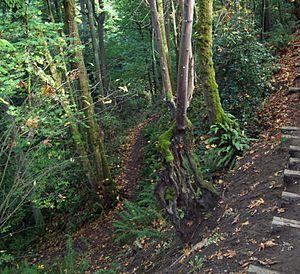 A view off a trail in Puget Park, Seattle.

In 1912, the park land was gifted to the city by Puget Mill Company. The Seattle Parks Board designated the space as Puget Park. However, the space was designated as an undeveloped area for many years after that, with minimal maintenance.

In recent years, several Seattle youth groups have been allowed to build and maintain bridges and trails in the park.

All content from Kiddle encyclopedia articles (including the article images and facts) can be freely used under Attribution-ShareAlike license, unless stated otherwise. Cite this article:
Puget Park Facts for Kids. Kiddle Encyclopedia.