Kids Encyclopedia Facts
This page is about the park. For the neighborhood, see West Town, Chicago#Pulaski Park. 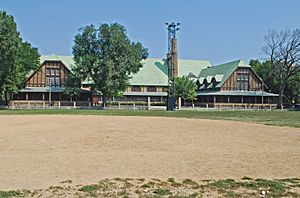 Pulaski Park is a park on the West Side of Chicago, Illinois. It was founded in 1912, and was named after American Revolutionary War hero Casimir Pulaski.

Pulaski Park derives its name from the historic park and fieldhouse that was designed by Jens Jensen between 1912 and 1914. 1,200 people were displaced, leading to the razing of a number of buildings while others were moved to nearby locations in the neighborhood.

The park and fieldhouse were listed on the National Register of Historic Places on August 13, 1981. It became an official Chicago Landmark on July 29, 2003.

The neighborhood in the park's vicinity within West Town is called Pulaski Park after the park.

All content from Kiddle encyclopedia articles (including the article images and facts) can be freely used under Attribution-ShareAlike license, unless stated otherwise. Cite this article:
Pulaski Park (Chicago) Facts for Kids. Kiddle Encyclopedia.