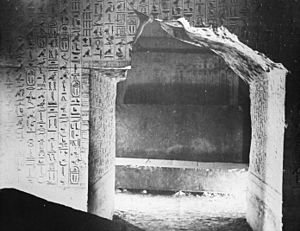 Pyramid text in the Pyramid of Unas I

Pyramid Texts is the name for several religious texts, found on the wall of several pyramids of the 5th and 6th and 8th dynasties. They are the biggest corpus of Ancient Egyptian texts.

All content from Kiddle encyclopedia articles (including the article images and facts) can be freely used under Attribution-ShareAlike license, unless stated otherwise. Cite this article:
Pyramid Texts Facts for Kids. Kiddle Encyclopedia.