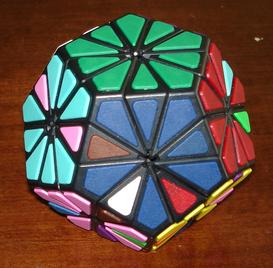 The Pyraminx Crystal (also called a Chrysanthemum puzzle or megaminx) is a dodecahedral puzzle similar to the Rubik's Cube and the Megaminx. It is manufactured by Uwe Mèffert and has been sold in his puzzle shop since 2008.

The puzzle was originally called the Brilic, and was first made in 2006 by Aleh Hladzilin, a member of the Twisty Puzzles Forum.

It is not to be confused with the Pyraminx, which is also invented and sold by Meffert. 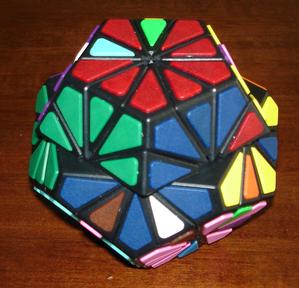 Pyraminx Crystal, one face in the middle of a twist

The puzzle consists of a dodecahedron sliced in such a way that each slice cuts through the centers of five different pentagonal faces. This cuts the puzzle into 20 corner pieces and 30 edge pieces, with 50 pieces in total.

Each face consists of five corners and five edges. When a face is turned, these pieces and five additional edges move with it. Each corner is shared by 3 faces, and each edge is shared by 2 faces. By alternately rotating adjacent faces, the pieces may be permuted.

The goal of the puzzle is to scramble the colors, and then return it to its original state.

The puzzle is essentially a deeper-cut version of the Megaminx, and the same algorithms used for solving the Megaminx's corners may be used to solve the corners on the Pyraminx Crystal. The edge pieces can then be permuted by a simple 4-twist algorithm, R L' R' L, that leaves the corners untouched, in a manner similar to the Pyraminx. This can be applied repeatedly until the edges are solved.

This gives a total of

All content from Kiddle encyclopedia articles (including the article images and facts) can be freely used under Attribution-ShareAlike license, unless stated otherwise. Cite this article:
Pyraminx Crystal Facts for Kids. Kiddle Encyclopedia.