Q-Genz 巧千金 (formerly known as 小千金 Cute Princesses) is a 4-member girl group formed in 2005 by a Malaysian company called Wayang Tinggi (威扬). Their ages ranged from 4–5 years at debut. Their first public appearance was in Four Golden Princess's 11th Year Concert. They released their first album 送你一个大年糕 (English Translation:Give You A Big New Year Cake) under the group name 小千金. A fortune teller recommended their record company to change the group's name to 巧千金 for better luck and success. The group celebrated their 10th year as a group and was later renamed Q-Genz in 2015. The last official album released as a group was in 2018. The Q-Genz members are currently still actively producing music, featuring in the music videos of other artists such as Nick & Stella Chung, Angeline Khoo, Queenzy Cheng and also Astro.

Their English name was tentatively called "Little Princess" or "Qiao Qian Jin" by fans until their company officially published their English group name as "Cute Princess" in their album. In 2008 the company Wayang Tinggi Corporation (威扬集团) was reestablished to a new name Starmedia Entertainment Sdn. Bhd. (星乐娱乐集团) before they release the 2009 CNY album "Little Golden Cow" (小金牛贺年).

In 2011, Cecilia and Alicia left the group and they were replaced with Joanne and Miko. Their 2012 Chinese New Year album "New Year Music Slam" (新年乐满贯) was released. The music videos were shot in China and only 2 music videos were shot in Malaysia. Their 2013 Chinese New Year album called Lion Dance Asking To Say Hello (醒狮来问好) was released on 12 December 2012.

Another album in production by Cute Princesses was announced on 24 June by their official company Starmedia. This album titled "Beautiful Day" (清新美丽) was later released On 28 November, their New 2014 Chinese New Year Album was released for pre-order. This album is titled "Lucky Fortune" (招财进宝) and marks the first time only three members participate in a Chinese New Year Album, with Viki not participating in this album, instead Angel Bei Bei makes another guest appearance. The Pre-Release consists of the DVD+CD, signed poster, horse bookmark and horse red packet. The group announced their upcoming Chinese New Year album to be released for the 2015 Chinese New Year titled "Perfect New Year Arrival" (新春十分嘉年华). They celebrated their 10th year as a group. With the release of this album, they also changed their English group name to Q-Genz.

At the start of 2016, it was announced that Q-Genz would be releasing a single 迎新送舊 (Welcome To Send Old) as they were busy with exams, they did not have time to film a full Chinese New Year album, but were able to release a single for their fans. On 11 July it was announced on their company Facebook page Starmedia that they were in the process of recording a new album, with the addition of a new member. It was announced through a video on their YouTube channel that the new member is Ivian Wong. Ivian joined in for their 2017 CNY album "Spring Breeze" (春风得意). During that time the company had difficulties in money management, Starmedia (星乐娱乐集团) was officially acquired by PMP Entertainment (环宇娱乐 (马) 有限公司). After the merger, it was retained as an independent brand. (referred to it as Starmedia/PMP (星乐娱乐集团/环宇娱乐 (星乐环宇)).

It was announced on Starmedia official Facebook page that Veron would not be participating in this coming CNY album "Full of Heart" (满满丰盛) to prepare for her exams and also to participate in My Astro 2018 CNY album (Astro 活出自己快乐Whoopee). The remaining 3 members will instead perform as a trio for their new album.

There had been no updates of Q-Genz from Starmedia on their official Facebook and YouTube. However, two members of Q-Genz, Joanne and Miko, guest-starred in Nick and Stella Chung CNY album "The Son of Heaven" (天子盛世). Joanne also participated in Astro's 2020 CNY album "Good Luck for You" (好运鼠于你). Veron also guest-starred in M-girls Queenzy 莊群施 CNY EP album for the second time, titled "Spring Breeze Smile" (春风笑了). Miko also guest-starred in M-girls Angeline 阿妮 CNY album for the second time, titled "New Year Reunion" (浓浓新年庆团圆). Despite this, there had not been any updates whether Q-Genz had renewed the contract or had been dissolved.

In July 2020, M-girls Angeline 阿妮 announced she had recorded her 2021 CNY album "Spring * Good Luck" (春天*打满好运气). In addition to Miko making a guest appearance, members Joanne and Viki had also returned to record songs for Angeline 阿妮 CNY album. Q-Genz fans were excited as it had been 8 years since Viki had appeared in a music video officially with Q-Genz. In an interview with Angeline, it was revealed that Viki returned to record a song was due to their close relationship.

(Stage name: Veron Lin, Chinese name: 練倩妏，born 20 February 2000), she was an original member who left the group after their 2017 CNY album. Although not featuring in the 2018 Q-Genz album due to studies that year, Veron is still credited as a member of the group.

(Stage name: Cecilia Lee, Chinese name: 李潔瑜，born 4 November 1999), she was an original member who left the group after their 2011 CNY album.

(Stage name: Alicia Low, Chinese name: 劉馨蔚，born 16 April 2000), she was an original member who left the group after their 2011 CNY album.

(Stage name: Viki Yap, Chinese name: 葉慧琪，born 11 November 1999), she was an original member who left the group after their 2013 CNY album, though had made an appearance in the 2021 music video 打满好运气 with members Miko and Joanne. 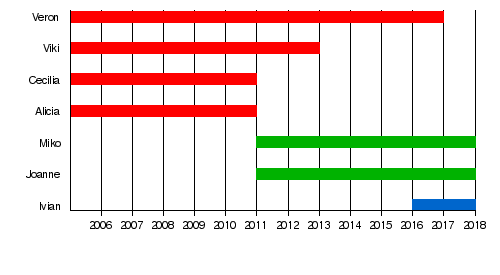 All content from Kiddle encyclopedia articles (including the article images and facts) can be freely used under Attribution-ShareAlike license, unless stated otherwise. Cite this article:
Q-Genz Facts for Kids. Kiddle Encyclopedia.