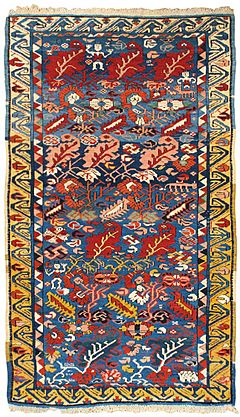 Zeikhur Caucasian rug from Quba District, made circa 1870

The fertile region surrounding Quba is best known for its production of apples and the city area of Quba is known for its fine carpets.

Quba rose to prominence in the 18th century. In 1747, Nader Shah ruler of the Persian Empire was assassinated. That same year, Hussein-Ali, the Shah's designated ruler of the region, decided to attempt to unify the Azeri khanates as an independent kingdom. One of his first moves was to relocate his capital from the less defensible Xudat in the Caspian lowlands to Quba where he built a fortress. Hussein-Ali died in 1757 and his son Fatali Khan carried on the expansion with Quba reaping the riches of its status as the capital. Some ruins from this period, such as Çirax Qala on the way to Baku, exist today.

However, upon Fatali Khan's death in 1789, the city's fortunes began to turn. In 1806, the khanate was occupied and soon absorbed by the Russian Empire. As a result, the city fell into the background of Azerbaijani history and politics.

The region is home to Azerbaijan's largest community of Mountain Jews in the community of Qırmızı Qəsəbə (formerly in Russian: Krasnaya Sloboda, English: Red Town), located just across the river from Quba City.

Guba region has been known for its fruitful gardens since the Soviet era. According to the annual report of the Azerbaijan Statistical Committee, the apple orchards in the Guba-Khachmaz economic region covers nearly 22,000 hectares. About 14,000 hectares of these are in the Guba district.

Since 2012, every year an apple festival is held in Guba. Compositions, national dances reflecting Azerbaijani custom and traditions, different types of apples, sweets and drinks prepared from apple are demonstrated at the ceremony. Various competitions are held among the gardeners at the "Apple Festival".

Information on historical and architectural monuments

Ancient Guba contains at least 134 historical and archeological monuments. These include the temple of Fire-worshippers near Khynalyg village, tombs of Aghbil village dating back to the 16th century, the Mosques Sakinekhanum, Hadjy Djafar and Djuma of Guba which dates back to the 19th century, and the Gumbezli bath house.

In the district, there is a bust of the state official A.A. Bakikhanov, the statue of poet Samed Vurghun and a statue of the Soldier, dedicated to the memory of those killed in the Great Patriotic War.

All content from Kiddle encyclopedia articles (including the article images and facts) can be freely used under Attribution-ShareAlike license, unless stated otherwise. Cite this article:
Quba District (Azerbaijan) Facts for Kids. Kiddle Encyclopedia.