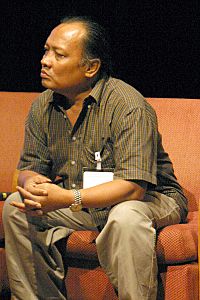 Rahayu Supanggah (August 29, 1949 – November 10, 2020) was a Indonesian composer. He was known mostly for his part in the international collaboration Realizing Rama and the music score composed for Robert Wilson's I La Galigo.

His compositions for Opera Jawa won the Asian Film Award in 2007. He was born in Boyolali Regency, Indonesia.

Supanggah died of an illness on November 10, 2020 in Surakarta, Indonesia at the age of 71.

All content from Kiddle encyclopedia articles (including the article images and facts) can be freely used under Attribution-ShareAlike license, unless stated otherwise. Cite this article:
Rahayu Supanggah Facts for Kids. Kiddle Encyclopedia.