Railroad Museum of the Niagara Frontier facts for kids 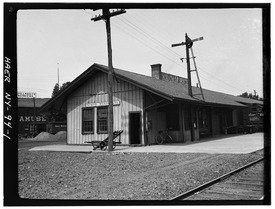 The former Erie Railroad station near the headquarters of the museum.

The museum was opened after members restored the depot on June 1, 2003. The ribbon cutting ceremonies included a speech from George Maziarz.

The Railroad Museum of the Niagara Frontier owns several small artifacts and four pieces of railway equipment. They include two bay-window cabooses, one of Erie ancestry and the other from the New York Central. The Museum's locomotives include a gasoline-powered Plymouth 20-Tonner and a Whitcomb 50-Ton Diesel-Hydraulic centercab switcher built by the Canadian Locomotive Company in Kingston, Ontario. This locomotive was formerly owned by the Tonawanda Island Railroad (TILR). Across the street from the station is an old New York Central interlocking tower called EL-2. Future plans are to restore the tower and integrate it into the museum.

All content from Kiddle encyclopedia articles (including the article images and facts) can be freely used under Attribution-ShareAlike license, unless stated otherwise. Cite this article:
Railroad Museum of the Niagara Frontier Facts for Kids. Kiddle Encyclopedia.