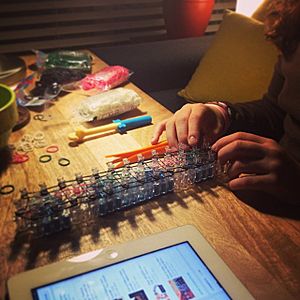 A Rainbow Loom in use

Rainbow Loom is a plastic tool used to weave colorful rubber and plastic bands (called loom bands) into decorative items such as bracelets and charms. It was invented in 2010 by Cheong Choon Ng in Novi, Michigan.

The Rainbow Loom is a plastic pegboard measuring 2 inches (51 mm) by 8 inches (200 mm). It has push pin-type pegs over which small, colored rubber bands are looped and pulled by a rainbow loom crochet hook. The resulting looped knots, known as Brunnian links, can be assembled on the loom into bracelets and other shapes. The Rainbow Loom kit includes the loom (the pegboard), a rainbow loom hook, 25 special C-shaped clips to connect both ends of the bracelet, and 600+ small rubber bands in assorted colors.

In August 2013 Ng filed suit against Zenacon LLC, makers of FunLoom; LaRose Industries LLC, makers of Cra-Z-Loom; and Toys "R" Us, distributors of Cra-Z-Loom, alleging that the rival products copied the design of the C-shaped fasteners used in rubber-band jewelry-making on the Rainbow Loom. LaRose Industries immediately lodged a countersuit against Ng's company, Choon's Design LLC. In August 2014, LaRose challenged Choon's patent and filed the first-ever post-grant review proceeding brought under the America Invents Act. The review ended in January 2015 after a settlement.

In some of the knock-off versions, high levels of the carcinogenic substance Phthalate have been found, in some cases well above the allowed limit in children's toys in Europe. British investigators found Phthalate levels over 400 times the legal limit, and several toy stores have removed these products.

The Norwegian Environment Agency also found higher than legal levels of DEHP, and several products have been banned from the market. However, it has been confirmed that it was only some non-Rainbow Loom-brand charms, and not bands.

All content from Kiddle encyclopedia articles (including the article images and facts) can be freely used under Attribution-ShareAlike license, unless stated otherwise. Cite this article:
Rainbow Loom Facts for Kids. Kiddle Encyclopedia.