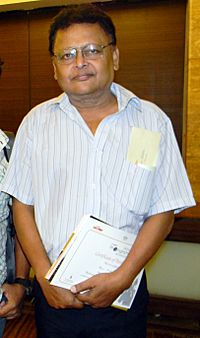 Raja Mishra (1947/1948 – 2 November 2020) was an Indian movie director, screenwriter, cinematographer and music director. He was a gold medalist in cinematography from Film and Television Institute of India, Pune.

He directed a total of 12 Odia movies. His career began in 1978. He was born in Jatani, Khordha. Mishra was known for his works in Aranya Rodan, Nirbachana and Joymoti.

All content from Kiddle encyclopedia articles (including the article images and facts) can be freely used under Attribution-ShareAlike license, unless stated otherwise. Cite this article:
Raju Mishra Facts for Kids. Kiddle Encyclopedia.