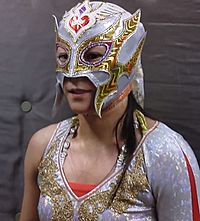 Ray (February 14, 1982 – August 30, 2018) was a Hong Kong professional wrestler. Ray made her professional wrestling debut in September 2003 and would for the next several years wrestle under different masks, before she began working for Smash in March 2010. She remained with Smash until the promotion folded in March 2012.

During her career, Ray held the CMLL-Reina International Junior, International Ribbon Tag Team and WNC Women's Championships, among other titles.

All content from Kiddle encyclopedia articles (including the article images and facts) can be freely used under Attribution-ShareAlike license, unless stated otherwise. Cite this article:
Ray (wrestler) Facts for Kids. Kiddle Encyclopedia.