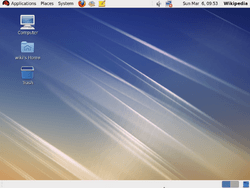 Red Hat made it public in the past and it was used by many Linux users. The last publicly-released version was Red Hat Linux 9 in April, 2003. Red Hat then decided to discontinue a future release of Red Hat Linux and started the paid Red Hat Enterprise Linux instead. There are some redistributions of RHEL, though such as CentOS which are free and come without Red Hat's branding, logos etc. due to trademark restrictions.

Red Hat Linux 7.3 version is still widely used around the world for servers and workstations.

Around 2005, The Red Hat company released their system as Fedora Core, intended to be a test platform for new technologies. It is now called just 'Fedora' and its present release acts as a base for the next release of RHEL.

All content from Kiddle encyclopedia articles (including the article images and facts) can be freely used under Attribution-ShareAlike license, unless stated otherwise. Cite this article:
Red Hat Linux Facts for Kids. Kiddle Encyclopedia.