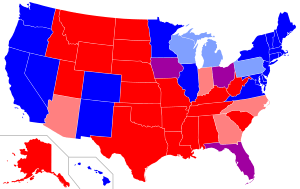 When elections are done in the United States, single US states are classified by their majority. In that context, in a blue state, the majority voted for a Democratic candidate, in a red state they voted for a Republican candidate. This classification has been in use since the year 2000. If people talk about a red or a blue state outside the context of an election, they refer to the party most people in the state usually support.

All content from Kiddle encyclopedia articles (including the article images and facts) can be freely used under Attribution-ShareAlike license, unless stated otherwise. Cite this article:
Red states and blue states Facts for Kids. Kiddle Encyclopedia.