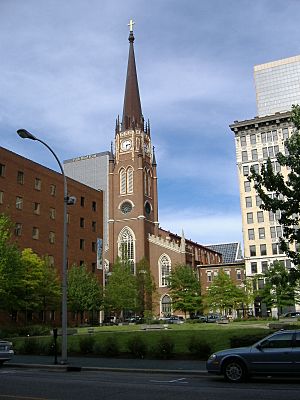 Louisville's Cathedral of the Assumption

There are 135,421 Roman Catholic Louisvillians who are part of the Archdiocese of Louisville, covering 24 counties in central Kentucky, and consisting of 121 parishes and missions spread over 8,124 square miles (21,040 km2). The Cathedral of the Assumption in downtown Louisville is the seat of the Archdiocese of Louisville. Our Lady of Gethsemani Abbey, the monastic home of Catholic writer Thomas Merton, is in nearby Bardstown, Kentucky and also in the archdiocese. Most of Louisville's Roman Catholic population is of German descent, the result of large-scale 19th-century immigration.

Bellarmine University and Spalding University in Louisville are affiliated with the Roman Catholic Church.

One in three Louisvillians is Southern Baptist, belonging to one of 147 local congregations. This denomination increased in number when large numbers of people moved into Louisville in the early 20th century from rural Kentucky and Tennessee to work in the city's factories; some of these migrants also formed Holiness and Pentecostal churches and Churches of Christ.

The city is home to two megachurches. Southeast Christian Church, with its main campus in Middletown and three others in the surrounding region, is, as of 2013[update], the seventh-largest church in the United States. St. Stephen Church is the 38th largest in the US, and has the largest African American congregation in Kentucky.

The historic Christ Church Cathedral is the seat of the Episcopal Diocese of Kentucky, which covers the western part of the state.

The Louisville Kentucky Temple, the 76th temple of The Church of Jesus Christ of Latter-day Saints (Mormons), is located in nearby Pewee Valley (mailing address of Crestwood), and serves members of the church in Kentucky, Southern Indiana, parts of Ohio and West Virginia.

The Jewish population of around 8,500 in the city is served by five synagogues. Most Jewish families emigrated from Eastern Europe at the start of the 20th century; around 800 Soviet Jews have moved to Louisville since 1991. Jewish immigrants founded Jewish Hospital in what was once the center of the city's Jewish district. From 2005 to 2012, Jewish Hospital merged with two Kentucky-based Catholic healthcare systems to form KentuckyOne Health, which later in 2012 announced a partnership with the University of Louisville Hospital. A significant focal point for Louisville's Jewish community is located near Bowman Field, where there are two Orthodox synagogues (including Anshei Sfard, founded in 1893), the Jewish Community Center, Jewish Family and Career Services, and an affordable housing complex.

In 2001, there were an estimated 4,000 to 10,000 practicing Muslims in Louisville attending six local mosques. These mosques include the Westport Mosque, a part of the newly founded Muslim Community Center. The Muslim Community Center includes The Islamic School of Louisville (ISofL), an expanding school located on Old Westport Road. The ISofL is adjacent to the Westport Mosque.

The Hindu temple of Kentucky opened in suburban Louisville in 1999, and had about 125 members and two full-time priests in 2000. The temple was renovated and rededicated in the summer of 2011.

Various Buddhist sanghas and organizations exist in and around the Louisville area. These include: The Louisville Community of Mindful Living (formerly "The Sangha of Louisville"), the Drepung Gomang Center for Engaging Compassion, and the Vietnamese Buddhist Association of Louisville.

Taoist practices in Louisville are represented by a local branch of the International Taoist Tai Chi Society.

The Bahá'í Faith has been present in Louisville from the 1920s, with the first Baha'i center opening in 1965. The current Baha'i center, dating to 1999, was designed to accommodate a larger active Baha'i community.

Louisville is home to a strong and vibrant Pagan community, including Wicca and other neopagan religions. There are over 60 Kentucky pagan groups listed at Witchvox, including over a dozen in Louisville. (Witchvox listings are voluntary, and usually represent only a small portion of the local pagan groups. Many or most covens and other pagan groups still prefer to remain private, as a way to avoid religious persecution.) Local networking for Louisville pagans is organized in various ways, not only through local covens and groves, but also through Louisville Pagan Pride, local pagan meetups via meetup.com, local occult shops such as MoonStruck, and a CUUPS chapter at a local Unitarian church. There was a Pagan Student Union active for years at the University of Louisville, but the club is currently dormant.

Since 1996, every May, the Festival of Faiths, a five-day national interfaith gathering, is held featuring music, poetry, film, art and dialogue with internationally renowned spiritual leaders, thinkers and practitioners. The festival is organized by the Center for Interfaith Relations and is held at Actors Theatre of Louisville.

All content from Kiddle encyclopedia articles (including the article images and facts) can be freely used under Attribution-ShareAlike license, unless stated otherwise. Cite this article:
Religion in Louisville, Kentucky Facts for Kids. Kiddle Encyclopedia.