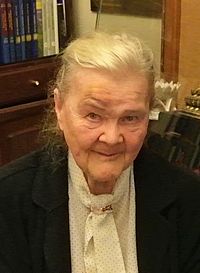 Renita Andreevna Grigorieva (Russian: Рени́та Андре́евна Григо́рьева; July 13, 1931 – January 19, 2021) was a Russian director, actress, writer, and screenwriter. She was a 1983 winner of the USSR State Prize. She directed the 1990 movie Boys. She also starred in There Is Such a Lad.

All content from Kiddle encyclopedia articles (including the article images and facts) can be freely used under Attribution-ShareAlike license, unless stated otherwise. Cite this article:
Renita Grigoryeva Facts for Kids. Kiddle Encyclopedia.